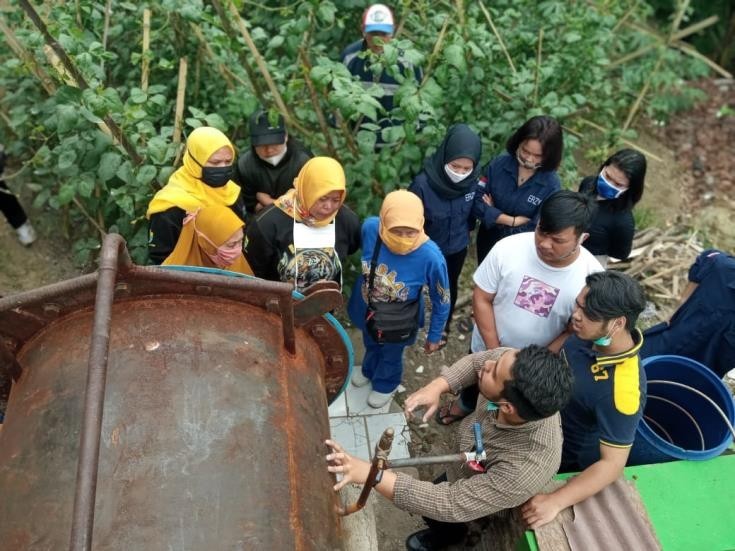 
West Java Province is the province with the highest Open Unemployment Rate/Tingkat Pengangguran Terbuka (TPT) of the total national unemployment rate, including Cihampelas District. The majority of education levels in Cihampelas sub-district are graduates of elementary school, junior high school (SLTP), senior high school (SLTA) and without a certificate Most of Cipatik's residents work as farmers and some as factory workers. The very low level of human resources has an impact on very complex social problems, especially social, environmental, and unemployment aspects.

Apart from human resources, environmental problems are also a big problem that occurs in the society. An uncomfortable environment caused by the problem of waste produced by the community around 31.5 m3 / day is not handled properly because of the low level of public awareness to be invited to participate in waste management.

Researchers at the Universitas Pendidikan Indonesia has developed the Ecovillage and Economic Independent Village program. Ecovillage is a description of a village with its inhabitants trying to live according to ecological principles, with the hope of reducing the environmental impact to a minimum through the activity of using village waste into valuable goods so that it can build village independence in the form of economic aspects.

Ecovillage and Desa Mandiri Ekonomi were developed with the aim that individuals have empowerment, the ability to establish themselves to have good physical and mental health, educated, strong, and also have intrinsic values that can be a source of empowerment. Individuals can survive in a dynamic sense, develop themselves and increase their human dignity, ability, and independence.

The Ecovillage and the Independent Economic Village program began with the manufacture of technology for processing waste into fuel and the manufacture of materials for provision to students and community groups. The waste processing technology consists of a cylinder with a diameter of 1 meter with a length of 1 meter and a cylinder thickness of 10 mm. This cylinder has a function as a reactor for the BBSA production process. The working principle of this tool is to put the waste into the reactor then heated to the temperature of 400-500C. At this temperature, the waste that consists of various components is converted into gas. The gas that has been produced is then flowed into the long bed catalytic reactor (LBCR) in the pyrolysis reactor to improve the quality of the gas produced, especially those related to the length of the gas hydrocarbon chain. This LBCR is used for the catalytic cracking process in which a natural catalyst is placed in the LBCR, namely dolomite that has been prepared previously. After leaving the LBCR, the gas flows through a 30-meter long copper condenser for the condensation process. some of the gas (40-50%) will be condensed into a liquid called BBSA and the other part becomes permanent gases such as methane, hydrogen, and carbon monoxide which are flowed into the furnace to be used as additional fuel.

Student debriefing activities are carried out to form your Hijauku Hijaumu Team which aims to become a target liaison to the community. This debriefing process involved 10 students of Mechanical Engineering, Economics, and Business. The material provided in this debriefing process includes material on waste processing, utilization of processed products, management theory, MSMEs, and all materials that related to business and opening new businesses.

The next activity is to build a furnace to house the reactor at a location that has been agreed by the community with the PPDM team, installation of waste processing equipment on-site, and provision to community groups. The provisioning activities and training practices provided are about how to make catalysts that will later be used for the BBSA production process and practices on how to make BBSA from waste and the practice of using BBSA produced on Biocom stoves.